Jump to Recipe Jump to Video

Caldo Verde is the most famous soup of Portugal. It’s a creamy potato based soup with Portuguese smoked chouriço and tender kale! Perfect healthy 30 minute meal.

Caldo Verde is a traditional Portuguese soup that’s so hearty and comforting you’ll forget how good it is for you. It’s perfect for dark rainy days or cold winters with its spicy smoked sausage, creamy potatoes, hearty kale and healthy chicken broth. It’s a one pot meal that’s ready to serve in 30 minutes!

This soup is one of those dishes that’s perfect for lazy rainy days or cold winter days, when you want something hearty and comforting but don’t feel like putting in a lot of work. It’s made with a few budget-friendly and simple ingredients. It takes about 10 minutes of prep work and it’s ready to eat in 30 minutes. Oh, and it’s all made in a single pot, too. And did I mention it’s delicious? It’s SO delicious!

I enjoy a rich creamy soup with all the potatoes being mashed or pureed, but you can leave it chunky by dicing them smaller and leaving them whole or just partially mashing to leave some texture. We like to switch it up in our family and rotate how we make it.

This is one of my dad’s favorite soups so I make it quite often all year round! He just loves the creaminess of the potatoes with a hint of spice and smoky flavor from the sausage.

As some of you may know, I am Portuguese-Canadian. So I was raised on a lot of traditional Portuguese cuisine. This soup being one of them! My vovó (grandma) always made this soup in huge batches. When I’d see her biggest soup pot come out I knew I’d be enjoying this soup for days!

It was not only so delicious because she would make it herself, but she would also use the kale that my vovô (grandpa) proudly grew in his garden every summer. AND he was sure to grow enough that there would be plenty for my vovó to freeze so that we could enjoy this soup throughout the winter!

It’s such a pretty soup to look at too, with its white creaminess from the potatoes, bright green from the kale and deep red from the smoked sausage! In the winter I like to make a big batch and freeze in individual zip-lock freezer bags. The soup reheats great and my dad can enjoy them whenever he wants!

Caldo Verde is a traditional Portuguese soup that is considered the unofficial dish of the country. It’s a creamy potato based soup that has kale (or collard greens) and chouriço. Chouriço is a Portuguese smoked sausage that’s packed with flavor from garlic, hot or mild pepper and red wine.

What is in Caldo Verde (Portuguese Kale Soup)?

This 6 ingredient soup (8 if you count salt and pepper) is the perfect weeknight dinner that comes together in a flash.

Pro-Tip: keep sliced kale and chouriço in the freezer so you can make this soup any day of the week!

Prepare the Soup Base

1 In a large Dutch oven or large pot over medium add olive oil. Sauté the onions and garlic, stirring frequently, until softened but not browned, about 2 minutes, adding olive oil if necessary to keep the mixture loose and moist.

2 Add in broth, potatoes, salt and pepper. Bring to a boil and cook until potatoes are fork tender.

2 Add kale and sliced sausage. Stir to combine. On medium heat, continue cooking until the kale is tender.

Season to taste with salt and pepper. Serve with fresh crusty bread or Portuguese buns (papo secos) and enjoy!

What does Caldo Verde mean in English?

What is Portuguese chouriço?

It’s a smoked sausage made with pork, wine, garlic, bay leaves, and sweet or hot paprika. Growing up my grandparents made the BEST homemade chouriço!

What is the difference between Portuguese chouriço and Spanish chorizo?

Where did Caldo Verde originate?

Caldo Verde is a soup that originated in northern Portugal from the Minho Province . It’s not only a traditional national favorite, but also loved in Brazil and other places that have a strong Portuguese community. Caldo Verde is almost always served at all Portuguese celebrations, such as weddings, birthdays, and popular holidays.

Is Caldo Verde considered the national dish of Portugal?

This delicious soup is considered the unofficial national dish of Portugal. It’s served through the entire country, and every family has their own signature recipe. You’ll find this soup in fancy restaurants, at weddings and celebrations and in home kitchens.

Is Caldo Verde good for you?

Caldo Verde is considered a healthy soup. One of its main ingredients, kale or collard greens, are known to be one of the healthiest foods in the world. Kale is full of vitamins, minerals, and very rich in fiber.

Can you freeze Portuguese Caldo Verde?

Yes, Caldo Verde soup freezes well. Once the soup has cooled divide into freezer safe containers or Ziploc bags. I like to divide the soup into individual serving sizes so I can just grab a serving out of the freezer.

What to serve with Caldo Verde?

My favorite way to enjoy a bowl of Caldo Verde with Portuguese Buns (papo secos), crusty corn bread or baguette. I also love to have Bifanas (check out my recipe here) the most famous pork sandwich of Portugal, paired with my soup.

Try some of my families most popular traditional recipes:

Pair your Caldo Verde with a classic Portuguese dessert!

Disclosure: I only recommend products I would use myself and all opinions expressed here are my own. This post may contain affiliate links that at no additional cost to you, may earn me a small commission. 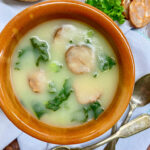 Authentic caldo verde calls for the soup to be blended and that’s how I enjoy it. If you prefer to leave it unblended, cut the potato pieces into smaller bite sized pieces about 1/2 inch instead. Follow the recipe as usual but do not mash or blend the soup. Or, you could scoop out a few ladles of potatoes to blend and then add it back to the soup to have a mix of chunky potatoes and puréed potatoes. Potato Notes Chouriço (Portuguese Smoked Sausage) Notes Vegetarian/Vegan Caldo Verde (Portuguese Kale Soup)
FOLLOW ON PINTERESTFollow @fedbysab
SUBSCRIBE ON YOUTUBE!Subscribe Fed by Sab!

Thanks for the recipe

My grandma ( vovo) owed a house north of oporto. Used to do summers as a child there in povore da verzim (sorry for the butchered spelling) anyway she passed some years ago and I always regretted not paying more attention when she cooked. I missed so much of her cooking. Gonna do your soup tonight. Also mish her fish cakes and I'd say ir in Portuguese by spell check would destroy it. Also the White fish with potatoes and egg with red vinger and oil.

This soup tasted just like my grandma used to make. Thanks for sharing. I will be making it often. So easy!

About Fed by Sab

Follow my tried, tested and true recipes with step by step photos and video.